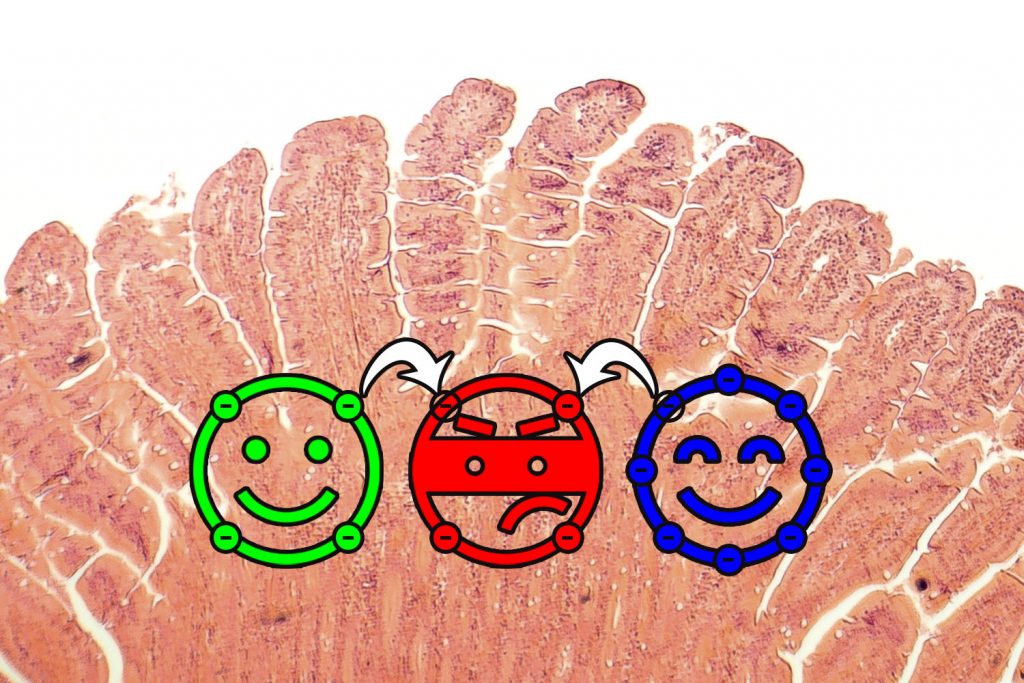 In physiological conditions, digestive epithelial cells and bacteria produce low amounts of free radicals, that are beneficial for the regulation of gut health. The equilibrium between the production of free radicals and their removal by the antioxidant defense system is called “redox balance”, as we explained in this article.

In certain situations, the antioxidant defense system cannot remove excess free radicals in the gut, leading to oxidative stress,  a harmful chain reaction that damages all kinds of biological molecules.

The main causes of digestive oxidative stress in farm animals are the following:

1.Effects on the digestive tissues

The intestinal epithelium is self-renewing continuously, and it is completely regenerated every few days. Developing epithelial cells are particularly sensitive to the action of free radicals, that show a strong affinity to the unsaturated fatty acids present in the cell membrane. Lipid peroxidation leads to changes in the structure and function of the epithelial cells.

The interaction between gut flora and the redox balance of the digestive system is complex:

In general, oxidative stress is linked to gut dysbiosis, which includes a decline in microbial diversity, a reduction of the number of beneficial species and an increase in pathogenic species.

3. Effects on the gut barrier function

In the recent years, an increasing number of investigations link oxidative stress to many diseases that are accompanied by infections or inflammation:

Use of phytogenics to relieve digestive oxidative stress

A growing body of evidence in vitro and in vivo shows that antioxidant phytogenics can prevent and ameliorate the dysfunctions caused by oxidative stress in the gut. Research proves that phytogenics can:

Learn more about our phytogenics for gut health here.