Sow’s constipation is directly related to production of colostrum and milk | PlusVet Animal Health
Constipation is a very common problem in late pregnant and lactating sows kept under close confinement, mainly due to insufficient fiber in feed or to lack of exercise. Heavier sows, from second parity onwards, are more affected than lighter sows. Whenever the sow does not defecate properly for 5 days (producing hard feces or not feces at all), constipation may become a serious condition. If the sow is affected by constipation: Feed intake is reduced and, as a consequence, less nutrients are available for colostrum and milk production. Decreased feed intake of the sow impacts the weight of the piglet at weaning, back fat thickness at the end of lactation and also the weaning to service interval. The sow is nervous and stressed, lies on its belly or sits like a dog, and it is reluctant to stand up. The process of farrowing might be slower than normal, putting the survival of the piglets at risk. Gut flora suffers a profound imbalance that leads to changes in the hormonal metabolism.
sows, mastitis, milk production, pregnant sows, farrowing, lactating sows, PlusVet Animal Health, feed additives, feed additives, plant extracts, essential oils, phytobiotics, phytochemicals, phytogenics, replace growth promoting antibiotics, natural products , digestive health,
32636
post-template-default,single,single-post,postid-32636,single-format-standard,bridge-core-2.5.9,qode-page-transition-enabled,ajax_fade,page_not_loaded,qode-page-loading-effect-enabled,,qode-title-hidden,side_area_uncovered_from_content,footer_responsive_adv,hide_top_bar_on_mobile_header,qode-theme-ver-24.4,qode-theme-bridge,qode_header_in_grid,wpb-js-composer js-comp-ver-6.4.2,vc_responsive,elementor-default,elementor-kit-1,elementor-page elementor-page-32636

Posted at 09:46h in Swine by PlusVet Animal Health
Share 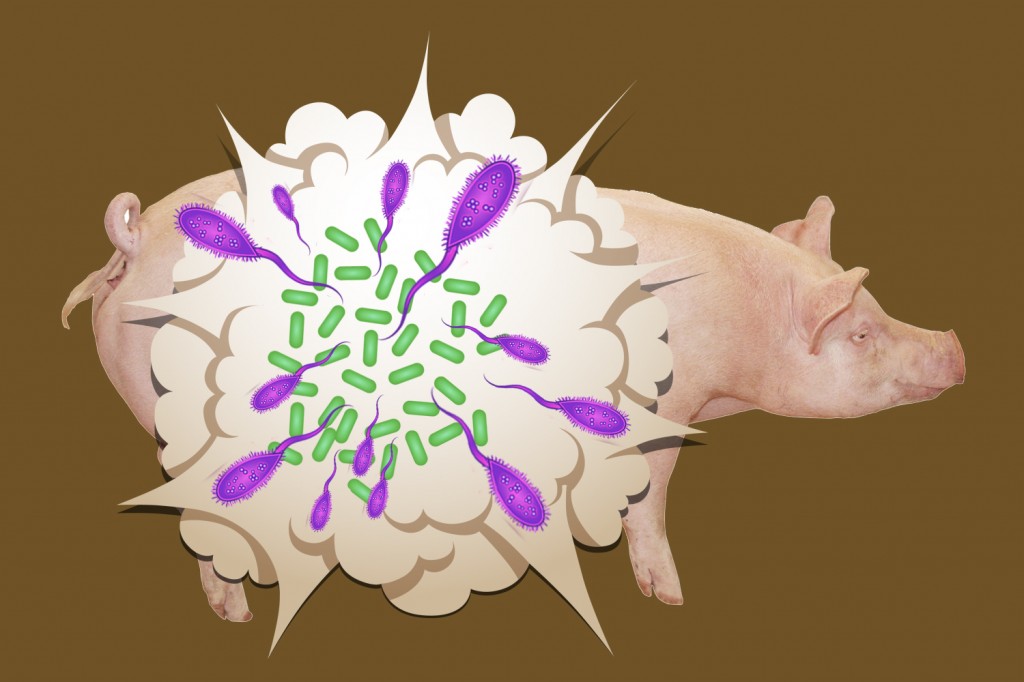 Constipation is a very common problem in late pregnant and lactating sows kept under close confinement, mainly due to insufficient fiber in feed or to lack of exercise. Heavier sows, from second parity onwards, are more affected than lighter sows.

Whenever the sow does not defecate properly for 5 days (producing hard feces or not feces at all), constipation may become a serious condition.

If the sow is affected by constipation:

Changes in gut flora due to constipation

Constipated animals suffer a reduction of intestinal peristaltic movements that changes the environmental conditions in the gut. This leads to an abnormally fast proliferation of Gram-negatives such as E.coli that, when conditions change after the phase of exponential growth, lose viability and massively die.

When they die, portions of the Gram negative cell walls become powerful endotoxins called lipopolysaccharides (LPS). LPS are absorbed through the gut wall into blood and cause enterotoxemia. The physiological activities of LPS are mediated mainly by their fat-soluble part, called lipid A. 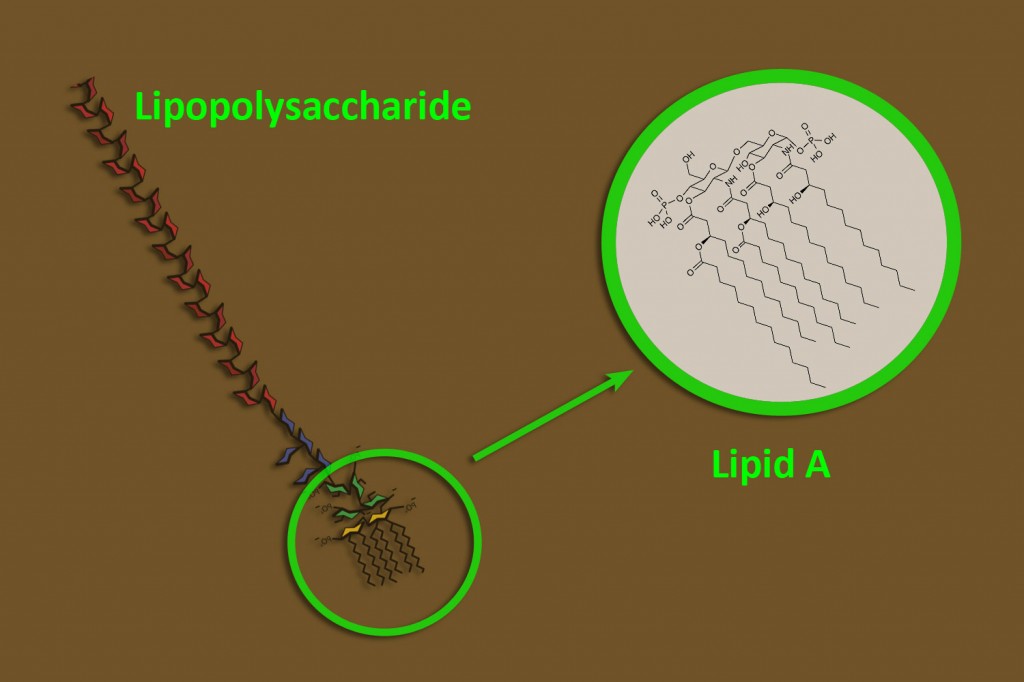 Once LPS are spread throughout the circulatory system of the sow, lipid A interferes with the metabolism of the animal:

Secretion of colostrum and milk is adversely affected by these metabolic changes.

LPS also contribute to the lack of appetite of the sow. 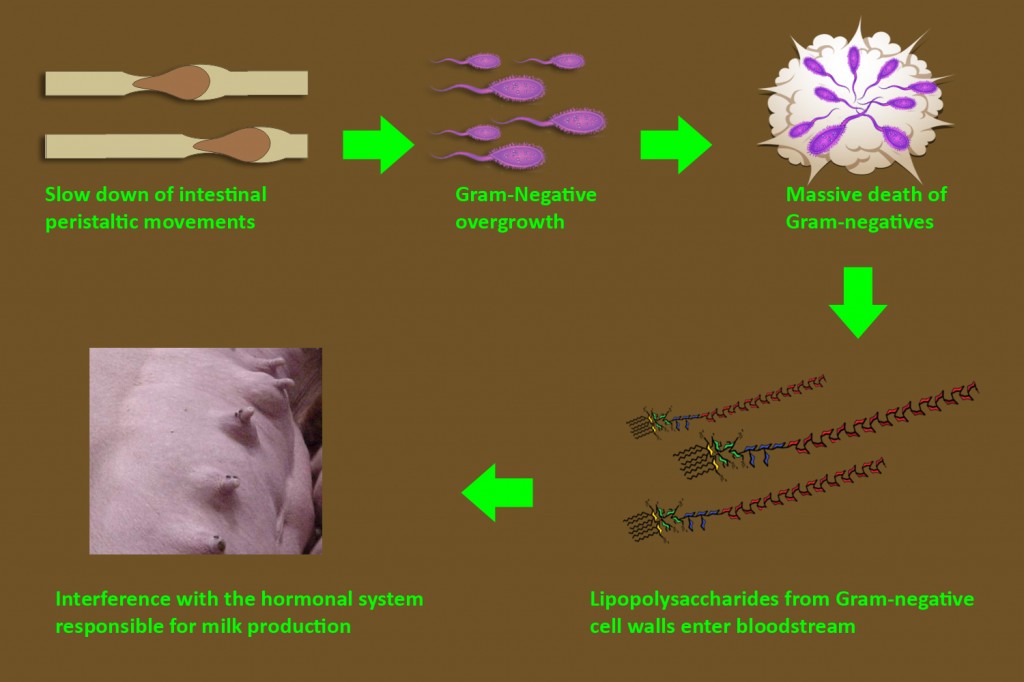 Infection of the udder by E.coli

Several weeks prior to farrowing, there is an increase of the fecal excretion of E.coli and LPS. Through the contamination of the farrowing crate or the skin of the animal, E.coli arrives to the udder, where it may proliferate and cause mastitis. LPS can pollute the teat and arrive inside the mammary gland, entering the bloodstream and causing the same hormonal interferences described above.

Stress and constipation produce an increase of the shedding of E.coli and LPS before farrowing. 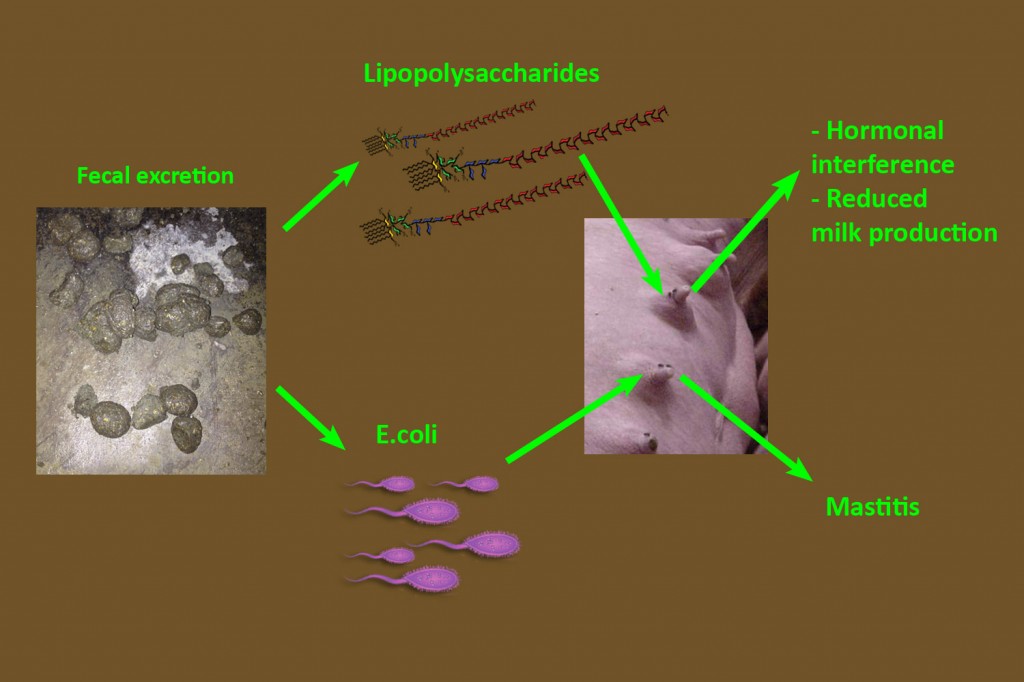 Consequences of the constipation in the farm

Constipation before and after farrowing is directly linked to postpartum dysgalactia syndrome (PDS). Postpartum dysgalactia syndrome is the insufficent secretion of colostrum and milk, especially within 12 to 48 hours post-partum, that leads to piglet starvation. The disease called “Mastitis metritis agalactia” or “MMA” is nowadays considered a subtype of PDS, and it is regarded as an old name for the problem, because in many cases there is not true agalactia, only reduced milk production, and the occurrence of metritis is very low.

PSD occurs worldwide and affects 20-30% of the sows, producing:

Role of phyto-active ingredients in the prevention of constipation

The best strategy for the prevention of constipation is to maintain a balanced gut flora. Phyto-active ingredients are effective through two mechanisms of action:

In the farm conditions, the administration of phyto-active ingredients to pregnant and lactating sows reduces drastically the cases of constipation and postpartum dysgalactia syndrome, cuts down piglet’s mortality by 46% and the occurrence of piglet diarrhea by half. 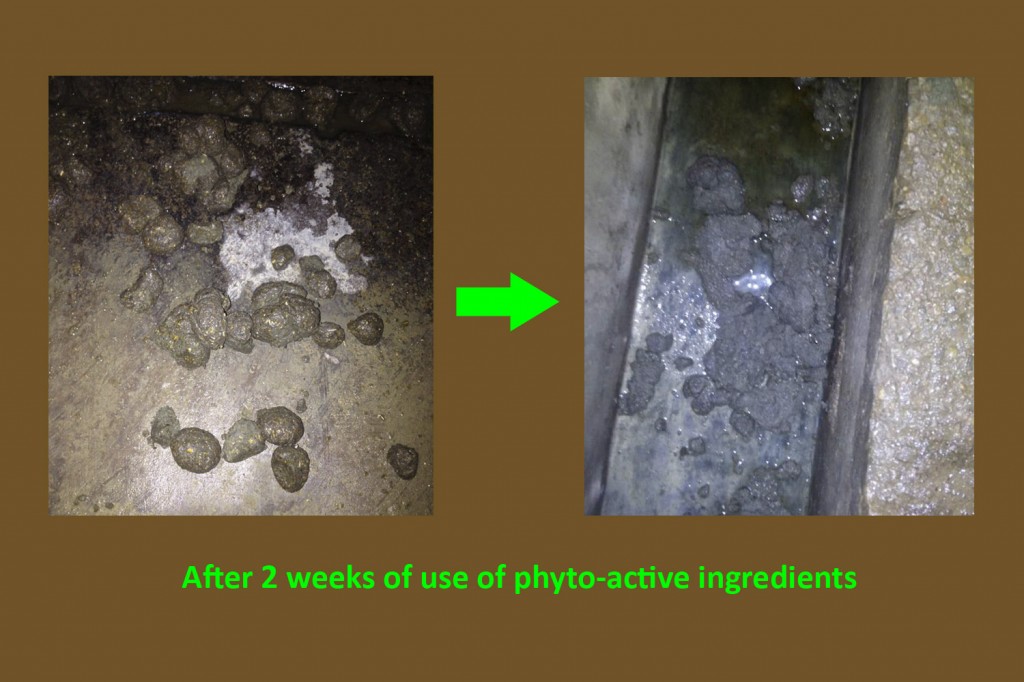 ChampionPig©, a program based on natural products to increase the number of piglets/sow/year