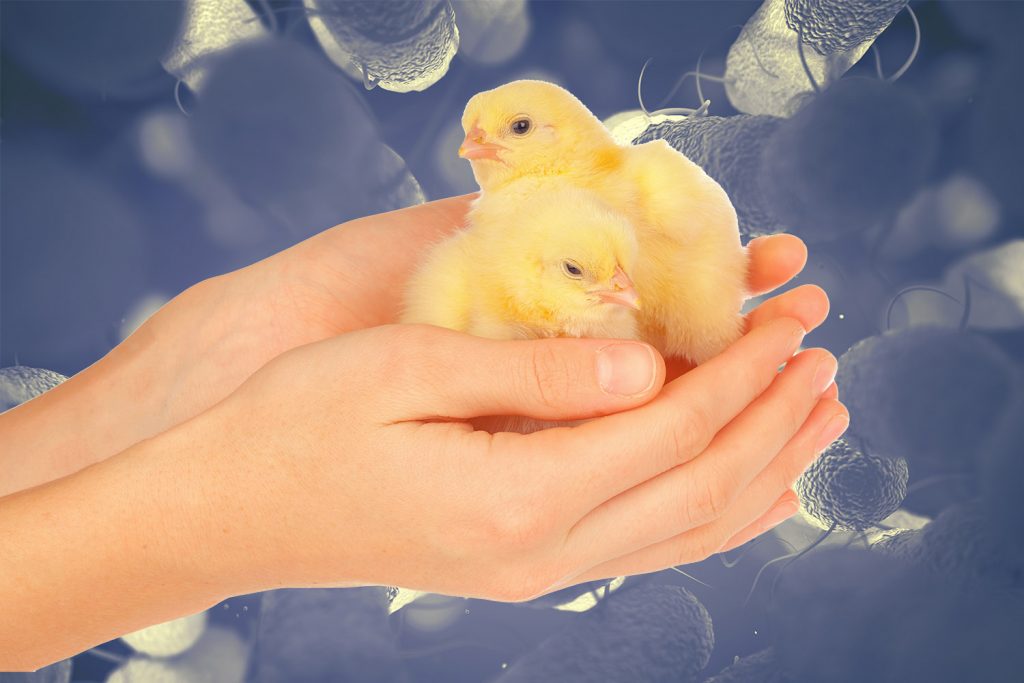 In a previous article, we explained that the digestive system is a natural reservoir of APEC (Avian Pathogenic Escherichia Coli) and that maintaining a healthy digestive flora is key to prevent the onset of colibacillosis.

The establishment of a healthy microbiome begins during egg formation

The reproductive tract of the hen is not completely sterile, so the initial microbial colonization takes place at the embryonic stage and during the transport through the reproductive tract. Additional microbiota will deposit on the eggshell during the passage through the cloaca, forming a biofilm. The microbes present in the biofilm will normally reach the newborn chick only after hatching, but if eggshell quality is suboptimal, they can enter the egg and colonize the embryo during incubation. The transmission of flora from the hen to the chick is called vertical transmission.

The reproductive or the digestive system of the hen may be infected with APEC and contaminate the developing chick.

After laying, the environmental microbes present in the laying house, during transport, storage or incubation, including APEC, may also deposit on the eggshell (horizontal transmission).

When the developing embryo is infected with APEC, it can develop a form of colibacillosis called yolk sac infection/omphalitis, which is a major cause of early chick morbidity and mortality. In other cases, the newborn chicks appear healthy, but in any case, they are carriers of APEC, which can cause infections later in the life of the animal.

Maturation of gut flora in the first weeks

After hatching, the gut contains only small amounts of microbes and it is rapidly colonized by microorganisms coming from the environment of the hatchery, transport boxes and the farm, as well as feed and water, all of which can be sources of APEC. The period from hatching to the third day is especially critical for APEC colonization because there is little bacterial diversity, and the microbiome is basically made up of Enterobacteriaceae, including Salmonella, Klebsiella, Proteus, and Escherichia coli.

The maturation of the microbiota of the small intestine takes 2 weeks, while in the cases of the large intestine and the cecum it takes 5 and 7 weeks respectively.  During the maturation period, the composition of the microbiome undergoes many changes, which are essential for the proper development of the digestive system, but they also make the gut more susceptible to colonization by pathogens such as APEC.

Colibacillosis is an opportunistic disease, it only occurs when the animals are weak. If APEC strains colonize the gut during the maturation period, the birds will appear perfectly normal and healthy, but may develop colibacillosis later in life, especially after an episode of stress, nutritional deficiencies, viral infections, poor digestive health, mycotoxicosis, etc.

Phytogenics ensure the establishment of a healthy microbiota

It is well known that the establishment of a healthy microbiota is closely related to a proper development of the digestive and immune systems, to better productivity, and to a reduction of the risk of diseases, including colibacillosis, throughout the life of the bird.

Administered during the first one or two weeks of life, essential oils with bactericide activity reduce the counts of intestinal pathogens, including E. coli and APEC, eliminating the harmful bacteria that have arrived to the gut through vertical and horizontal transmission, as well as those that come from the environment, feed and water after hatching.

On the other hand, phytogenics with prebiotic function boost the growth of beneficial bacteria such as Lactobacillus sp. and Bifidobacterium sp., and therefore indirectly cut down the population of pathogens.

Overall, the use of phytogenics during the early stages of chicks’ life helps to establish a healthy intestinal flora and reduces the risk of colibacillosis throughout the life of the animal.

Are you on Substack?