Posted at 09:54h in Mycotoxins by PlusVet Animal Health
Share 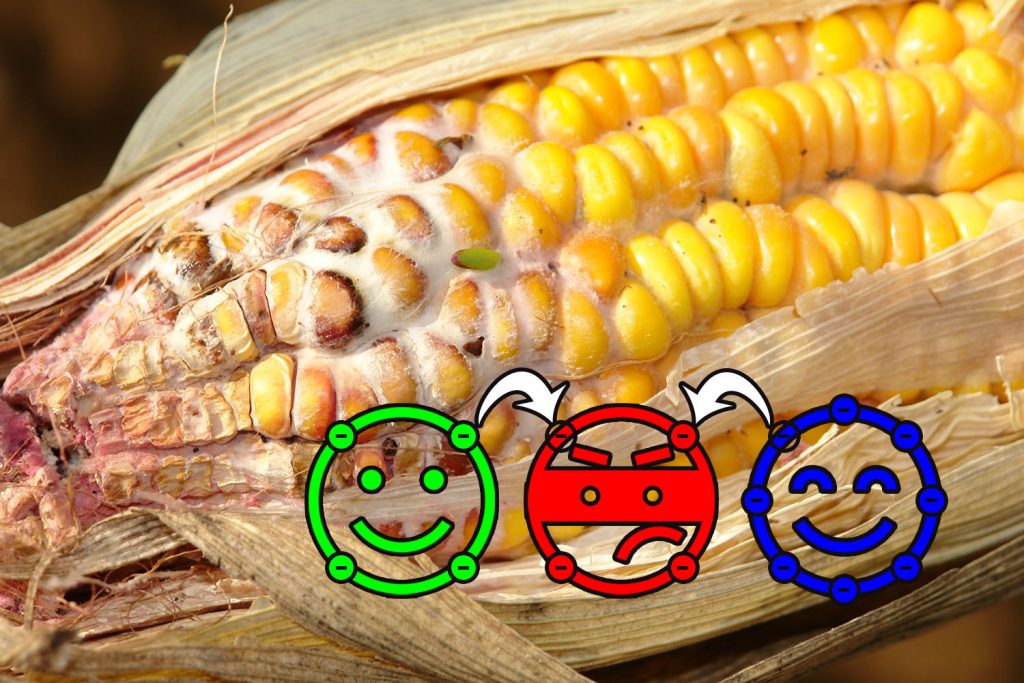 As we explained in this article,  oxidative stress is caused by an imbalance between the production and the elimination of free radicals in the body, which leads to a harmful chain reaction that damages all kinds of biological molecules.

Recent investigations indicate that oxidative stress is behind the toxic effects produced by some mycotoxins:

Aflatoxin B1 is produced by the fungi Aspergillus flavus and Aspergillus parasiticus. In poultry and swine, contamination by aflatoxins impairs productivity, produces lesions in the liver and depresses the immune system. Aflatoxin B1 is bioactivated to AFB1-8,9-epoxide, which binds to mitochondria and DNA and induces the production of free radicals. Then, the oxidative stress caused by the free radicals starts a metabolic pathway that ends with the death of the affected cells.

Fumonisins are a group of at least 15 mycotoxins, produced by Fusarium verticillioides and Fusarium proliferatum. They block the synthesis of complex sphingolipids, which play an important role in protecting nerves, muscles, and membranes. Fumonisins cause pulmonary fibrosis and liver lesions in swine; in poultry, they are related to immune suppression.

Several studies have shown that fumonisins promote free radical production and accelerate lipid peroxidation in cell membranes, which leads to changes in the function and shape of the cells.

Trichothecenes are a large family of chemically related mycotoxins produced by seven different species of molds. The toxicity depends on each individual mycotoxin, but generally speaking, trichothecenes are irritant and immune suppressors.

Ochratoxins are a group of mycotoxins produced by some Aspergillus species. They cause kidney and liver lesions, as well as immune deficiencies in swine and poultry.

Ochratoxin A is the most pathogenic, and it induces oxidative stress by both increasing the production of free radicals and impairing the antioxidant defense system, ultimately leading to cellular death.

Oxidative stress is an important consequence of contamination by mycotoxins and a key mechanism of action behind their toxicity.

The best approach to manage mycotoxin risk is to implement an integrated strategy that includes good storing practices of the feedstuffs, and frequent mycotoxin analysis, as well as the regular use of a mycotoxin binder. We at PlusVet Animal Health help farms to set up a mycotoxin risk management program and to evaluate the risk posed by mycotoxin in their feedstuffs.

On the other hand, whenever the diets are contaminated by mycotoxins, it is recommended to administer an extra supplement of antioxidants (PhytoShield©), to protect the animals from the negative consequences of oxidative stress.

Use of antioxidant essential oils to reduce the incidence of pale, soft and exudative (PSE) meat
How protein oxidation is related to meat quality
PhytoShield© improves performance, digestive health, and meat quality in broilers
Lipid oxidation in chicken meat
In one minute: Prevention of colibacillosis, establishing a healthy gut flora